ABOVE: Reproduction of the markings on a 6 inch x 6 inch x 6 inch granite cube of masonry, inserted into a special North-East Cornerstone slot at the Georgia Guidestones, and ceremonially smashed with a hammer on 25th September 2014 (coincidentally or not, also the Jewish New Year). The 6 inch width of the Cube, was verified using high enough resolution pictures of the Cube when in situ in the Guidestones slot as compared to the known 2 metre wide English slab. It was definitely a 6x6x6 inch Cube; 666 is a number of exceptional importance in the occult and Biblical prophecy.

This post will explore why this bizarre little ritual event was related heavily to the relationship between the date 22/11/2014 and the probable coming Future Terror Attack against the Kaaba and Mecca Clock Tower which will most probably occur on 11th January 2015.

END_OF_DOCUMENT_TOKEN_TO_BE_REPLACED 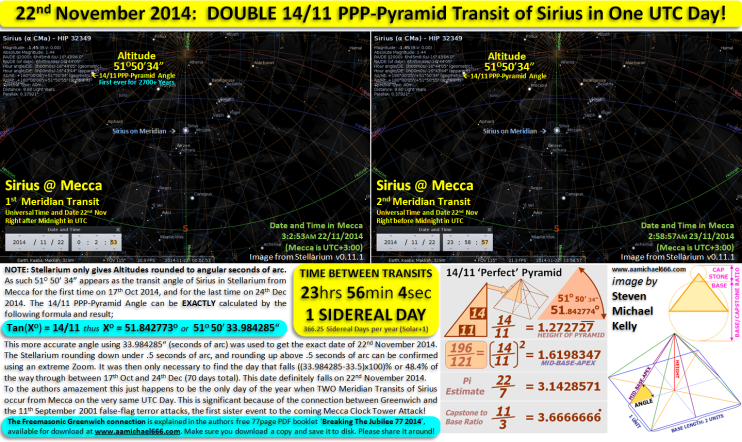 ABOVE: A virtual sky view of the double transit of Sirius from the Kaaba, Mecca, on 22nd November 2014, both occurring in the same UTC Date of 22nd Nov. Also a brief explanation of how this date was singled out as being significant to this location using a special PPP-Pyramid Angle known as the 14/11 or Perfect Pyramid.

22/11/2014 is the primary date encoded in the Georgia Guidestones 666-Cube, that was ritually smashed on 25th September 2014 (The Jewish New Year). The connection between Sirius, 22/11, and the coming Mecca Clock Tower ritual sacrifice which is most probably planned for 11th January 2015, is key to understanding how the secret occult controllers of the western world, are planning to transform the world into a new Empire under their control.